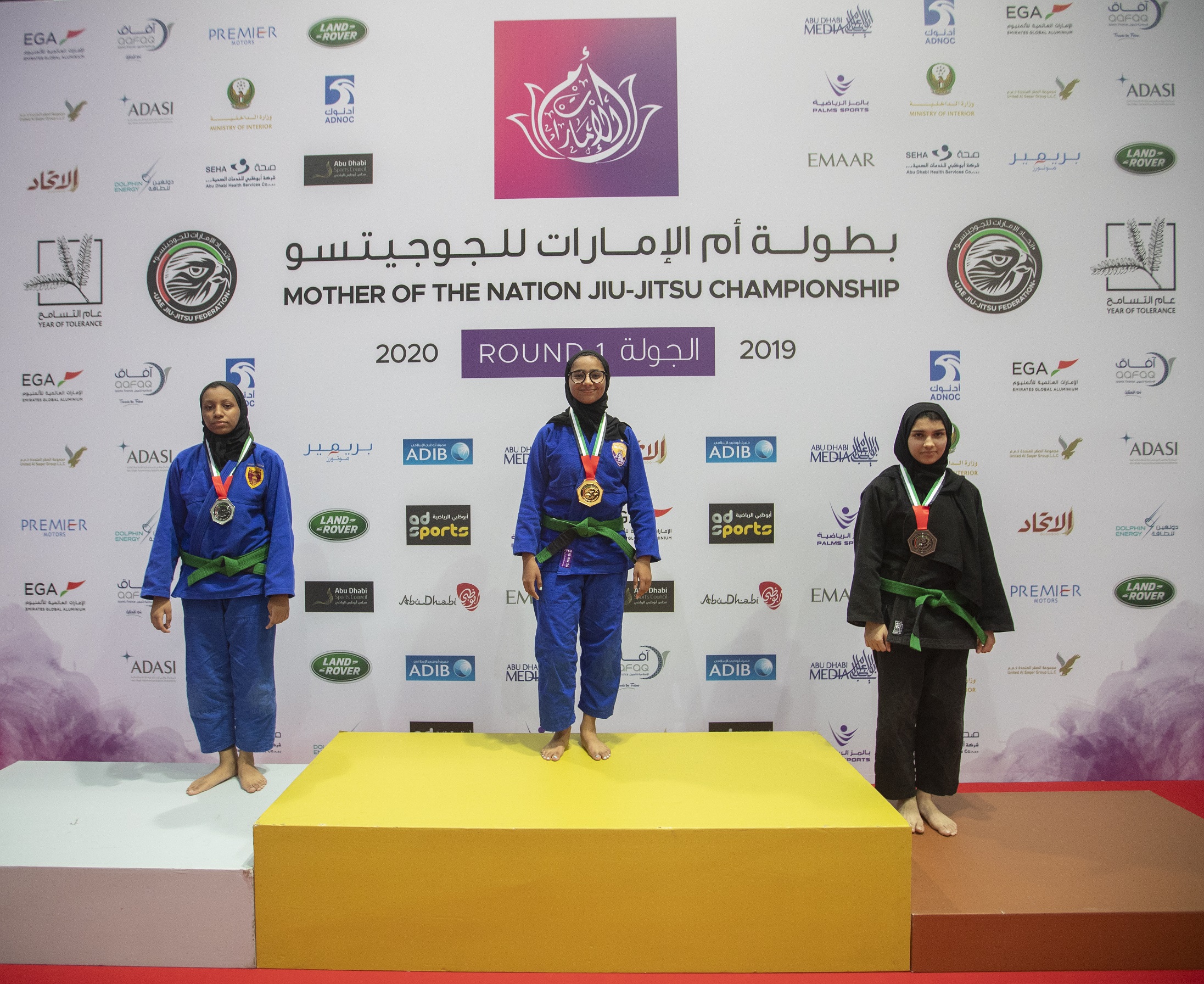 More than 330 athletes take part in highly-competitive event Abu Dhabi, UAE –
September 8, 2019: The first round of the Mother of the Nation Jiu-Jitsu Championship concluded at Mubarak Bin Mohammed Sports Hall in Abu Dhabi with more than 330 female athletes representing nine clubs from across the UAE, shining the spotlight on the strength of women’s jiu-jitsu in the Emirates.

Athletes from Al Wahda, Al Ain and Al Dhafra clubs shone in the competition across three categories: Teens (Under 16s), Juveniles (Under 18s) and Adults (Over 18s) with the high level of competition showing the progress of women’s jiu-jitsu since the inaugural edition of this tournament in the 2016-2017 season.

Al Wahda took first place with 675 points, with Al Ain (590 points) in second place.
Samira Al Rumaithi, Board Member of the UAE Jiu-Jitsu Federation (UAEJJF), said: “The Mother of the Nation UAE Championship has gained a prominent place on the UAEJJF’s agenda. The wise leadership of our county are keen to prepare a generation of professional Emirati female athletes who are capable of raising the UAE flag high on the international stage.

“Since the tournament’s first edition back in the 2016/17 season, we have witnessed a significant increase in the number of participants who have performed at a high level on mats. This has been further highlighted in the great professional level of players in the first round of the competition.” added Al Rumaithi.

“Our leaders are constantly providing the support needed for Emirati to achieve their goals in both the local and international stages in various fields including cultural, social, economic and sports fields.”

Shamma Al Hosani, from Al Wahda Club, a blue belt player and a junior gold medalist, said: “I was training for two sessions on a daily basis to prepare for this tournament for an achievement that will uplift my career.”

“I love this sport as I have learned the willingness to thrive for greatness and to continue to work hard to win more medals at future tournaments.”
Salama Al Muhairi of Al Ahli Youth Club, a grey belt holder and a gold medal winner in the youth category, said: “I had an intensive training programme in preparation for this tournament, with a commitment to a balanced diet in order to reach an ideal weight”

“Those efforts paid off with my gold medal I would like to thank my instructor who provided all the help to this level. Umm Al Emarat Championship motivates jiu-jitsu players to continue in this beautiful sport that teaches us self-confidence and respect.”

“At the start of the tournament I was feeling a bit nervous,” said Tasnim Ahmed Al Jawhary of Al Wahda, a white belt and gold medal winner. “I had a very difficult fight today, as I was about to surrender. However, the sport of jiu-jitsu teaches you to persist and thank God I was able to win the gold medal in the first round of the championship of the UAE.”

The second round of the UAE Jujitsu Championship will be held on February 8, 2020 at Mubarak Bin Mohammed Sports Hall in Abu Dhabi.
For further information, please contact:
Mohammad Akkawi
+971 4 390 2964
UAEJJF@actionprgroup.com