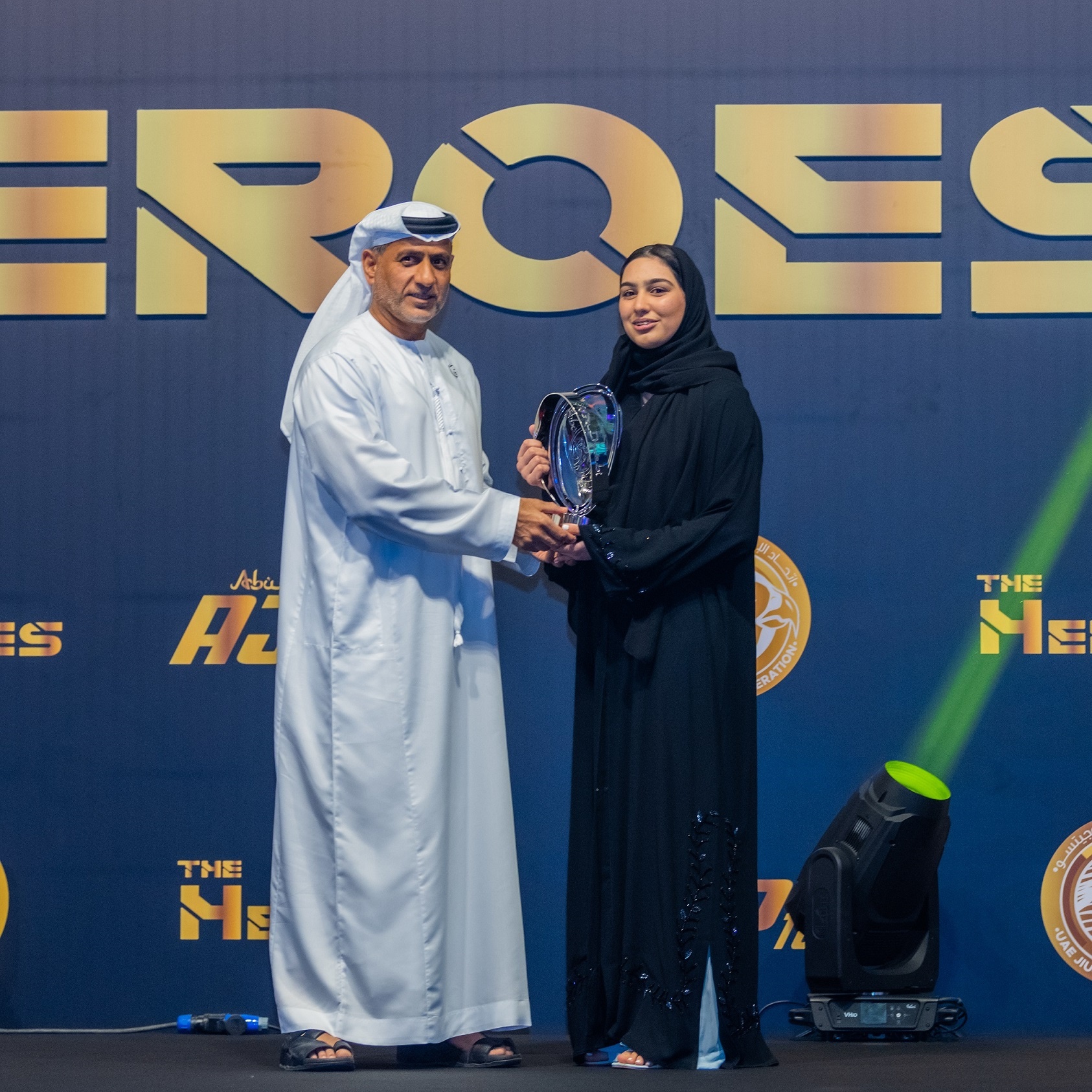 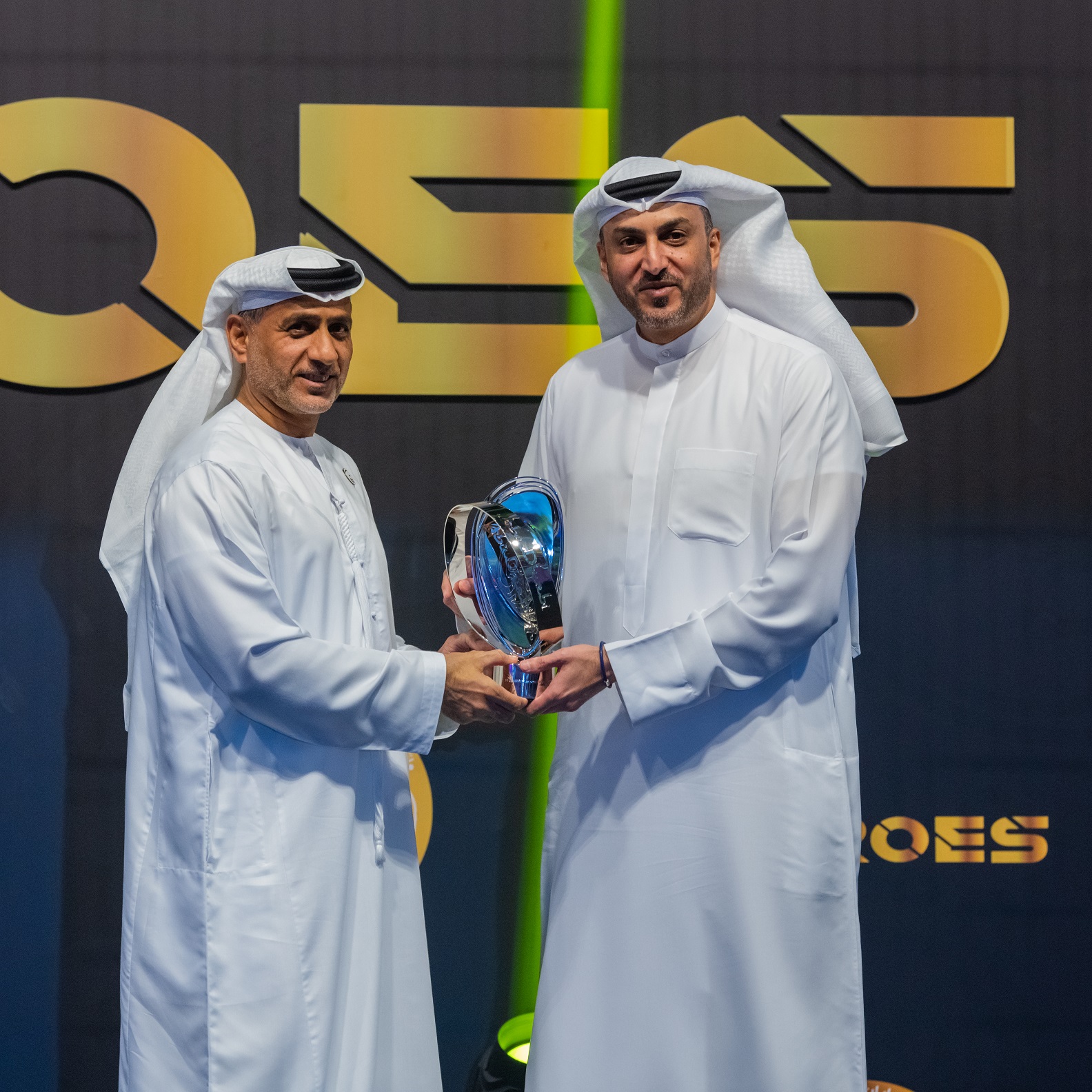 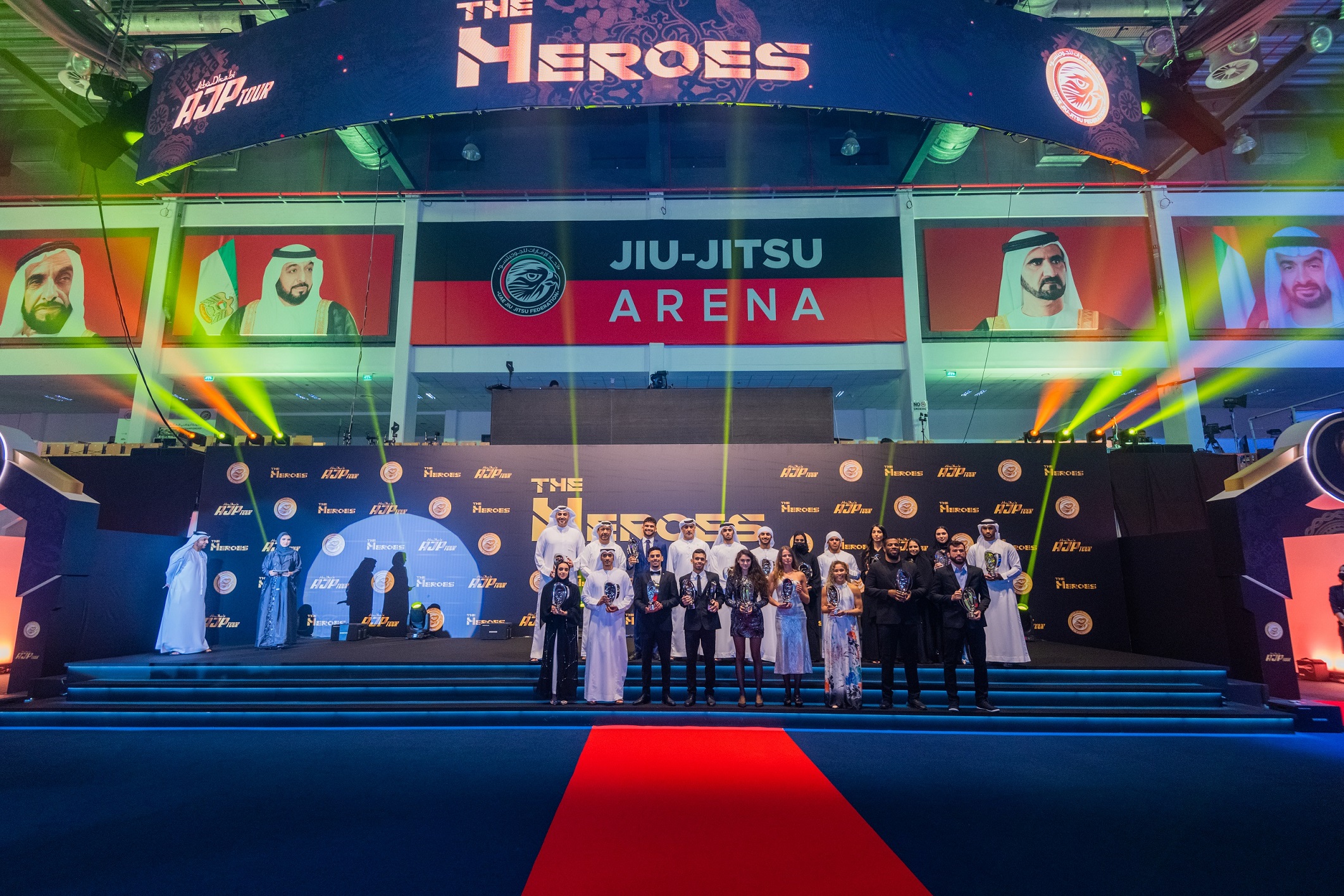 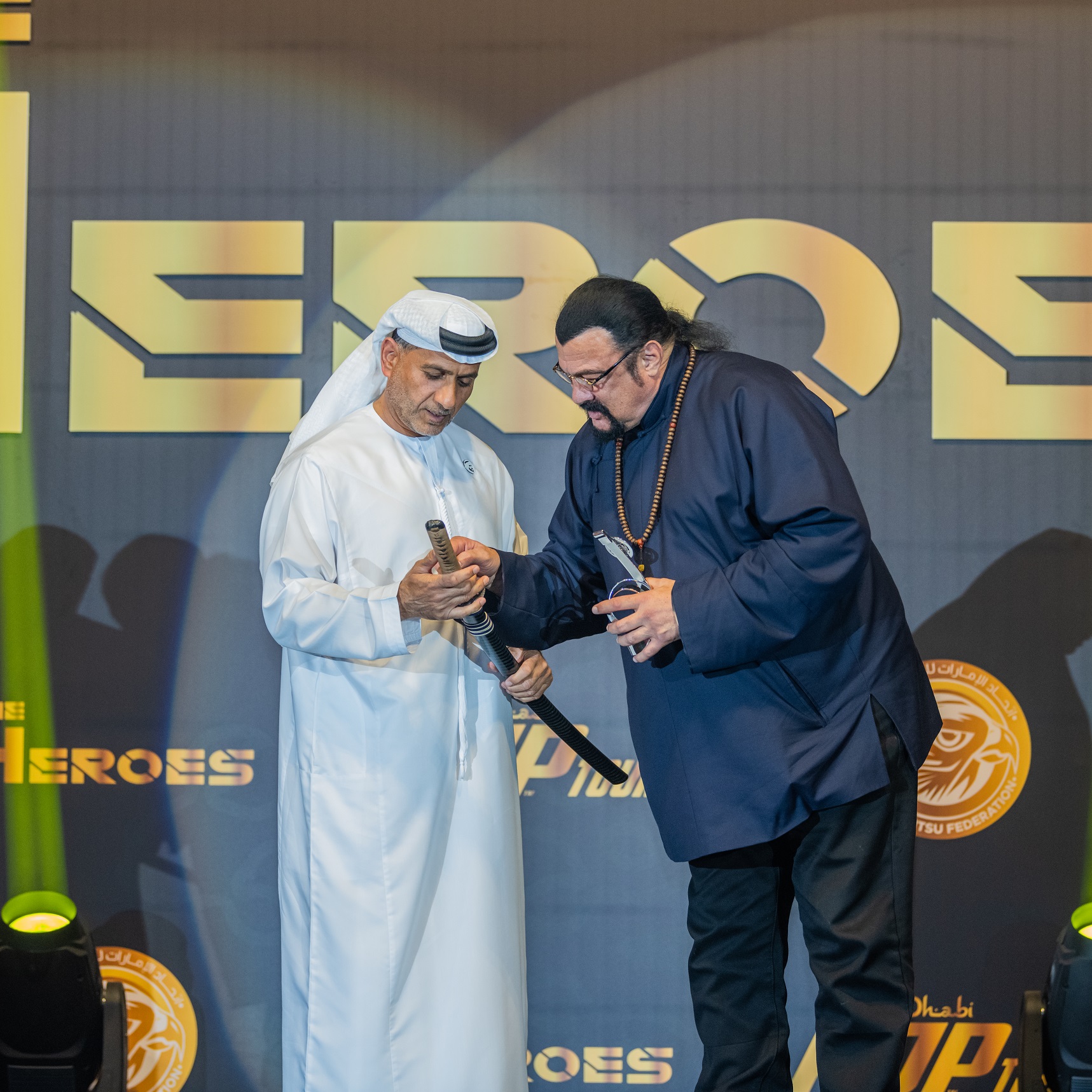 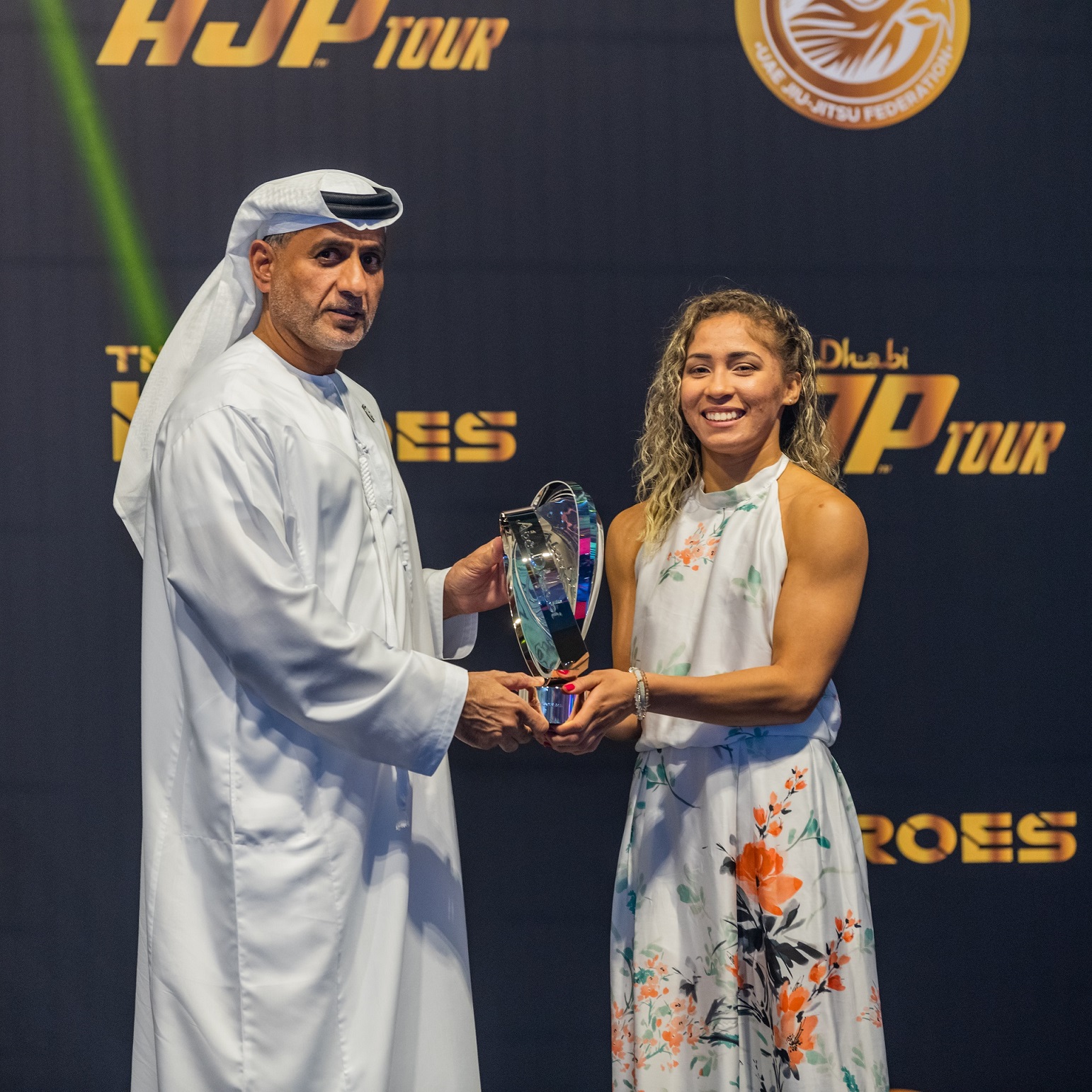 Al Hashemi: Abu Dhabi will continue to be the global capital of jiu-jitsu and give our heroes a springboard to reach for the stars

Jiu-jitsu stars from the UAE and across the global were honoured in a grand ceremony organised by the UAE Jiu-Jitsu Federation (UAEJJF), the governing body for the sport in the UAE, following the culmination of a thrilling Abu Dhabi World Professional Jiu Jitsu Championship (ADWPJJC) at Jiu-Jitsu Arena.

His Excellency Al Hashemi said: “Abu Dhabi will always be the global capital of jiu-jitsu and continue providing a platform for our heroes of the sport to aim for the stars.”

“The Abu Dhabi World Jiu-Jitsu Awards have become the most important honour jiu-jitsu athletes from around the world seek to win especially as the awards recognise and acknowledge achievements over the past season and follow the ADWPJJC, the largest and most prestigious event on our calendar, which is held under the generous patronage of His Highness Sheikh Mohamed bin Zayed Al Nahyan, Crown Prince of Abu Dhabi and Deputy Supreme Commander of the UAE Armed Forces.” Al Hashemi added.

“We are proud to be able to provide the ideal platform for players around the world to compete and prove their capabilities.”

“Today as we mark the achievements of the past season, we also look forward, marching towards continued excellence to consolidate Abu Dhabi’s status as the global capital of jiu-jitsu and a destination for world stars.”

“100 players from AJP’s 81 championships qualified to be part to the largest and most prestigious event on the global calendar, the 13th of Abu Dhabi World Professional Jiu-Jitsu Championship, having received the highest-ranking points.  Granting awards for the highest ranked international players and academies at the Abu Dhabi World Jiu-Jitsu Awards with the most prestigious titles crowns a spectacle run they had in the 2021 season.”

Commenting on the awards, Ahmed Al Junaibi, Director of Al Wahda Jiu-Jitsu Club Academy, said: “Al Wahda Jiu-Jitsu Club Academy heroes continue to shine year after year, as the academy continues to attract the world’s brightest names to participate in the championships. We are thrilled in winning two awards after a performance for the ages by our players during the season and at the 13th edition of Abu Dhabi World Professional Jiu-Jitsu Championship.”

Omar Al Fadhli rose to the occasion and stole the show at the 13th ADWPJJC winning the gold in the 62kg men’s brown belt competition resulting in his upgrade to black belt, earning him the UAEJJF’s Most Valuable Player Award.

Commenting on his win, Al Fadhli said: “All the hard work and efforts that I put in training paid off, however, the biggest contributor of my success was the unlimited support provided by the UAE Jiu-Jitsu Federation, my fellow Emirati colleagues, and of course the special attention from H.E Al Hashemi.

“I am honoured to receive the award today. Jiu-jitsu has taught us that the path of success does not end, therefore, I must direct my focus on what’s next.  After obtaining the black belt, I need to train harder to acquire new skill set to compete in the highest level and win against the best in the world. I am confident in what the future holds.”

During the evening’s activities, Hollywood action star Steven Seagal, presented H.E Al Hashemi with a 300-year-old Samurai sword as a token of appreciation for Abu Dhabi’s efforts to continuing growing the sport and providing a platform for the world’s athletes to compete.

“The Samurai sword embodies the spirit of the fighter and carries a special significance in Japanese culture,” said Seagal. “As we share a love for this sport, I wanted to show my appreciation for what Abu Dhabi is achieving in the world of jiu-jitsu by presenting this sword to the Federation, and it serves as a token of respect to the jiu-jitsu players of this country. The blade length is the highest standards according to Japanese culture and the handle and scabbard bear distinctive engravings. It is my honour to present this to my friends in Abu Dhabi.”

The Abu Dhabi World Jiu-Jitsu Awards ceremony celebrated clubs in the UAE that have excelled during this season and continue to grow the sport. Those winners included:

The awards ceremony also included honours for UAE jiu-jitsu athletes who have impressed on the mats this season:

In a celebration of the continued growth of jiu-jitsu around the world, the Abu Dhabi World Jiu-Jitsu Awards crowned a range of continental winners:

The awards ceremony culminated with the Abu Dhabi World Player Awards, presented to global athletes who have had a truly exceptional year on the mats around the world. Those winners included: